The origins of the Cerne Abbas Burial Ground go back to Abbey times and there is evidence from post-Dissolution records that the Abbey granted land during their tenure for parish burials within the present burial ground. Following the Dissolution, it came under the freehold of the incumbent of St Mary’s Church. The attractive 1768 map of the village shows that by this date the ‘Church Yard’ roughly resembled a rectangular shape, with St Augustine’s Well on the southern boundary. 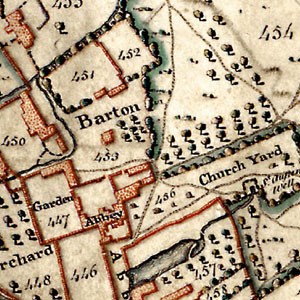 The Burial Ground shown at left, may be found at the north end of Abbey St and was extended further to the south in 1885, to east of St Augustine’s Well.

Until 1837, when Civil Registration was introduced, parish churches were responsible for recording burials. For St Mary’s Church the burial registers survive from 1653 to 1862.

The original registers are now in the Dorset History Centre for perusal, but have been transcribed by the Dorset On-line Parish Clerk (OPC) for family research.

In 1885 a Burial Board started recording burials in customised Burial Registers, a responsibility assumed by the Cerne Valley Parish Council from 1894.

A copy of these registers from 1885 to 2004 has been loaned to the Society by the Parish Council for the purposes of research. The registers record burials in much more detail than the old church parish registers, as an extract from the 1885 register shows, but are subject to statutory limitations on disclosure. The Society has the approval of the Parish Council to answer any individual queries relating to family research, but not to release the registers in their entirety. Queries on burials later than 2004 will be referred to the Parish Council.

The Burial Registers mentioned above do not record where the burial took place. However, there are surviving headstones and memorials in the Burial Ground and the Church. On many of these memorials can still be discerned the details of the person or persons commemorated. These details are called Memorial Inscriptions (M.I.s) by genealogists. In 1994 the Cerne Historical Society conducted a survey of the surviving MIs and the results can be seen on this site and downloaded here as a pdf.  This index gives basic information on each M.I. such as whether an interment of an ancestor took place in the burial ground and where they are buried, but the Society may be able to provide suplementary information. Two memorial brass tablets in the floor of the nave of the church, dated 1612 and 1626, refer to the Notley family. The Notley’s were early settlers in America and owned Cerne Abbey Manor in Washington, the site on which Capitol Hill stands today. In 1676, Thomas Washington married Maria Randoll in the church. They lived in the Pitchmarket opposite the church and the pump head from that house, dated 1697 and bearing the initials TMW, is now in the Dorset County Museum in Dorchester. It is said that Thomas was the uncle of George Washington, the first President of the United States of America.